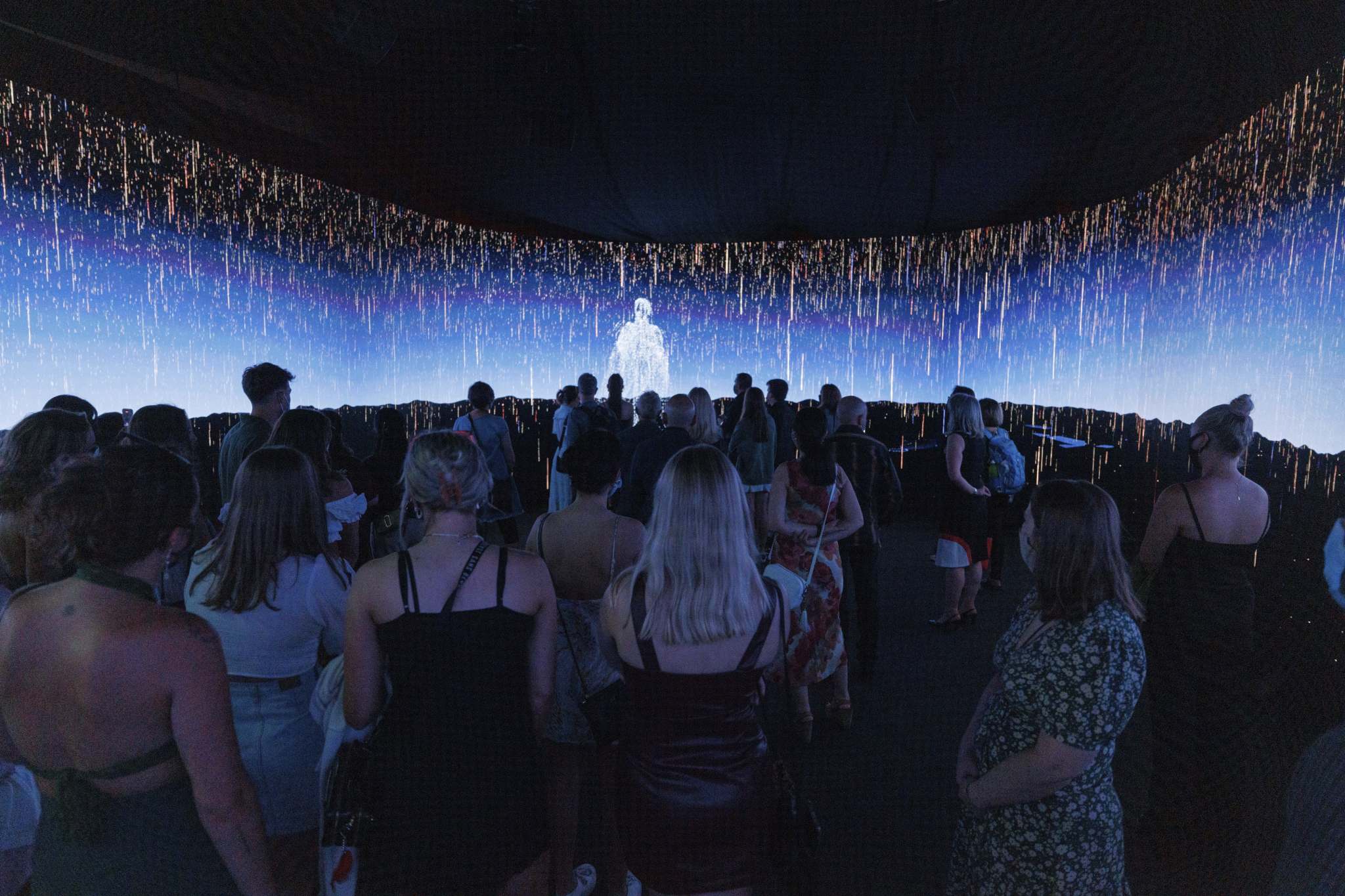 Nick and Sophie Dunstone want to serve you a keen meal then take you to another universe.

Their Light Cultural Foundation, a pandemic-era project tucked in a previously unfashionable corner of Adelaide’s CBD, is at the forefront of a global surge of experimentation in using technology to put audiences at the centre of the action in music, performance and the visual arts.

Behind their new restaurant Aurora is a growing rabbit warren of rooms packed with multimedia technology that surrounds and transports visitors – with an open invitation for artists and performers to come, experiment, and innovate. Oh, and at least one of the rooms is also a bar.

“We’re still trying to work out what the best way to harness the potential is,” says Sophie. “But there’s definitely a chemistry here.”

But while they’re grateful for the recognition, they’re much more excited about what happens next.

“The technology is not the focus, but creating a storytelling canvas that is more powerful than if you were just in a black room,” says Nick. “The artist is the curator of that experience. It’s the artist’s tool. And when they understand how it can be used, by working with the technologists, that’s when the magic happens.”

So what actually is it?

Well, there’s The Lab, a bar surrounded on three sides by huge LED screens that can show scenes from around the world (or anything, really) – and which hosts music, dance and experimental art. Upstairs, The Studio adds camera tracking and real-time world-creation technology to 150 square metres of LED screens, used as virtual sets for film and TV (like the tech used to create The Mandalorian), or for live performances. And this month they added The Ellipse, a space surrounded by LED screens, premiering a show called Immersion, which takes visitors on a 50 million-year journey through the history of water.

And the restaurant at the front is joining in the fun, with “augmented reality” menus that add an animated experience to your meal.

If “pivot to digital” is the most overused term in the arts for the couple of years, then “immersive” has to come a close second. But cliches are coined for a reason. Australia is seeing a lot of experiments like this: the Lume digital art gallery, which just opened in Melbourne; and Opera Australia’s new digital sets this year delivered a spectacular Aida and next year will be the backdrop to The Ringcycle.

‍
“The technology has evolved, so it’s really only in the last couple of years we’re at the point that creating worlds inside rooms is possible through computer engines,” says Nick.

Think of it like VR without the headset. It’s not just losing the bulky headgear, it’s about making it a social, cultural experience, says Sophie: “There’s something about the magic of having human bodies all together in one space, in one room.

“When we’re engaging with art, yes, there are lovely meditative moments that we can do alone, but there’s something extra in having people there with you sharing it. It adds a whole other level to the experience and that’s what we’re really trying to harness.”

Nick, a “fund manager slash lawyer” and clinical psychologist Sophie grew up in Adelaide but have spent 20 years living and working in London, Sydney and Hong Kong, having kids and “a bit of a crazy life”, says Nick. They felt the pull to reconnect the family with Australia, but they wanted to use their savings to give something back to the community: the foundation is a non-profit charity which the couple are supporting on its way to becoming a self-sustaining creative hub.

“We’ve always had a passion for the arts and Nick was in a rock band in his youth,” says Sophie, who studied voice at the Conservatorium in Adelaide and sang with the Philharmonia Chorus in London. They wanted to marry their passions with their capital, cross-pollinating hospitality and the arts, with technology as the glue.

They are only beginning to explore the potential of the space: in the future they expect to host filmed or live-streamed concerts from around the world, documentaries, video art installations, live dance where the on-screen images react to the performers, and much more.

Says Nick: “It’s a new canvas, and a new instrument”.

Read full article at The Age
Back

Thank you! Your submission has been received!
Oops! Something went wrong while submitting the form.